The Nisqually Indian Tribe, like most people of the Salish Sea (Puget Sound), lived in villages along river watersheds. They called the river Squally and named themselves Squalliabsch meaning people of the grass: people of the river. It is believed that the Nisqually Tribe came from the east over the Cascade Mountains and created some of their earliest villages along the Nisqually River at Stake Creek, Elbe, and the Mashel River. They progressed down the Nisqually River Basin to form more and more villages within the basin to the Puget Sound. These villages were usually located along smaller rivers (or at the confluence) off the larger rivers and consisted of two to three cedar homes. There as many as fourteen villages at one time. Each village was a family groups with a leader called a headsman. Nisqually historian Cecelia Carpenter wrote:

Leadership under the Nisqually structure existed within each village population. One person, usually an adult male, was chosen to become the “head man” in each village by the popular support of the people of his village. The person who was elevated into this position of leadership, whether it be through popular demand or by heir, must be proven to possess wisdom, bravery, and compassion. His wisdom in deciding issues must rest in the welfare of his people. His bravery must be displayed as he trained the young men of his village to become great warriors and be ready to defend their homes if and when the tribes to the north came down in the waters of the south Puget Sound to attack Nisqually villages and take slaves. His compassion must extend to accept the responsibility for the care of the less fortunate of his village: widows, orphans, and the handicapped. Under normal circumstances, there was no one chief or leader in charge of all of the Nisqually villages. When a common enemy appeared, a leader of the combined villages was chosen for the duration of the emergency.
Whenever there was a threat of harm or invasion, more formal leaders would rise up among the villages. Two such leaders were Leschi and his older brother Quimeth. Leschi was born 1809 in the upper mountain village of Bashelabesh (or Me-shal) where the Mashel River meets the Nisqually River near present day Eatonville. His father was the village headsman, and his mother was related to Yakama tribal leaders. The Nisqually Tribe celebrates his life and leadership every January 30th. His life spanned from traditional times to contact with the British (Hudson’s Bay Company) to conflict with the Americans. Before he walked on from life, Leschi is quoted as saying, “Whatever the future holds, do not forget who you are. Teach your children, teach your children’s children. Teach them the pride of a great people…. A time will come again when they will celebrate together with joy. When that happens, my spirit with be there with you.”

Villages shared common hunting and plantlife gathering areas with other Indian People but did not believe that land could be owned or have boundaries. Resources from the land and water were and are life giving. They were grateful. When Nisqually Indians look at the delta, forest, plains, wetlands, and valleys, they see the resources for themselves and that of their ancestors. The plant life and animals supplied all their needs. Each season of the year, Nisqually women and men traveled by foot or canoe from the shores of Puget Sound to the foothills of Mt. Rainer to gather and hunt. They did not have gardens or livestock (cows, sheep, etc.) but went to the places where plants grew naturally and animals migrated in the best conditions. There were favorite spots to go to year after year to gather and hunt. They traveled together and set up camps to pick from huge patches of berries such as salmonberries, huckleberries, and other types of berries were and are gathered in the high country toward Mt. Rainier when they were ripe and ready to dry and pound into cakes or used for tea. Berries and other plants that were used for medicines and herbal teas. They would harvest cedar, bear grass, cattails, and sword fern used for baskets, shelter, and bedding and gather wild carrots, grains, camas, and other vegetables and roots in the prairies. 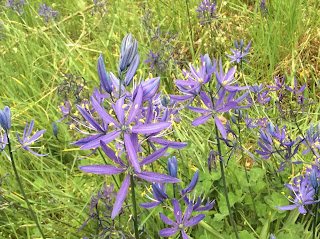 Camas grows in open areas. It is a root plant, and the bulb was a main food source. When in bloom, the lavender flowers indicated they are safe, while the white flowers are toxic. To this day lavender bulbs are dug up. To prepare Camas, it must be cooked for 36 hours in a fire pit. Although these bulbs could be found in wooded areas, they are predominantly harvested from meadows or the prairie lands. Other roots were also an important part of the Nisqually diet, past and present.

In the fall, Nisqually Indians set controlled burns on the prairies, which promoted the growth of tender grasses. The grasslands attracted wild grazing animals such as deer and elk, and made hunting much easier and closer to home.

Nisqually Indian People depend on the salmon runs and capture them with fishing weirs. The salmon are considered great gifts, and they only take as much as they need to live. In the past, the rivers flowed full of salmon. Even today, the Nisqually and other tribes of Washington State have the right to salmon fishing that is protected by the Federal Government.

“ARTICLE 3. The right of taking fish, at all usual and accustomed grounds and stations, is further secured to said Indians in common with all citizens of the Territory, and of erecting temporary houses for the purpose of curing, together with the privilege of hunting, gathering roots and berries, and pasturing their horses on open and unclaimed lands: Provided, however, That they shall not take shellfish from any beds staked or cultivated by citizens, …”

During the annual runs, five species of ocean-going salmon come up the Nisqually, Puyallup, and other rivers. The first fish caught in the spring was prepared in an earth pit stove, shared, and eaten by members of the village. The bones, left intact, were returned to the river, pointing upstream. This display was symbolic. It meant that the villagers were respectful to the fish spirits and wished that, because the ceremony had been done correctly, many more fish would come up the stream during that year. A dance followed the ceremony called the “yil-me-hu,” a Nisqually word that means “the salmon dance, on its first arrival (Carpenter, Cecilia Svinth, Fort Nisqually: A Documented History of Indian and British Interaction. A Tahoma Research Publication. 1986. p13).”

Mt. Rainier is loved and revered by the Nisqually Tribe. They are in awe of the mountain’s tremendous beauty. From many views, three peaks rise up like a crown, and the mountain can be seen from almost anywhere in Western Washington. It was considered a gift from God. Members of the Nisqually Tribe respect the mountain and never felt the need to conquer it by climbing to the top. To them, the mountain is the giver of life, since the Nisqually River flows from its Rainier’s melted snowfall and ice caps down through the forest and lowlands.

The Nisqually River and its tributary rivers and creeks are just as important to the Nisqually today as it was in the past. Flowing waters, such as Muck and Ohop Creeks and the Mashel River, run in a snake-like pattern to the green, glacial water of the Nisqually River. The Nisqually River, which runs from Mt. Rainier to Puget Sound, is larger, faster, and more powerful than surrounding rivers. It served as a superhighway for canoes.

The Nisqually used certain canoes made from cedar trees for specific use. Shovel nosed canoes
allowed passage through rivers and creeks. Usually, a person stood up and used the pole to reach out, pull down, and push past themselves to move the canoe along. Puget Sound canoes were smaller and less ornate than coastal, seafaring ones. They were longer with raised bows and sterns for the wakes and waves created in the sound. In larger, seafaring canoes, families and other members of villages traveled by canoe to visit or accept invitations to a potlatch to celebrate an event such as a marriage or birth or participate in other ceremonies. Over the years, the creation of seafaring canoes faded away. Lands containing old growth cedar trees to make the canoes were taken from Indian People. The great cedars were over-logged and cut down for dams or cleared for other construction, such as towns and cities.

Not only were seafaring canoes made from one old growth cedar tree, but many other needed items were and are supplied from the cedar tree as well. In the Puget Sound area, cedar was used to make and create shelters of cedar planks in addition to smaller items such as clothing, hats, wristbands, baskets, and many smaller items. “Si-A-Gut was a well-known Nisqually basket maker whose family originally came from the Cowlitz area. She made coiled and imbricated baskets (Cecelia Carpenter: From her book Nisqually Indian Tribe).” Basket weaving provided time to spend with others, a chance to pass on the skills to the youth, and a way to create beautiful gifts. Clothing was and is made from the soft, inner bark. The bark was softened and woven. Robes were waterproof: perfect for Western Washington rainforests.

During the colder months, cedar plank houses in the main villages kept the Nisqually protected and warm. Strong sturdy frames held the solid planks that insulated the families from the wind, rain, hail, and snow. These dwellings were smaller and had fewer decorations than those built by Coastal Indians. Most villages consisted of two or three houses. When Nisqually Indians traveled to different locations to gather and hunt, they used spring and summer shelters built to be flexible to accommodate the varying temperatures of the days and nights of the season. Cattails were woven into mats layered over cedar frames. The mats could be rolled up to allow the breezes through. Fir boughs created another type of temporary shelter because the materials were easy to find and could be bent into a rounded, tent-like shape for sleeping and cooling off.

Even though the Me-schal Village no longer exists, the Nisqually Indian Tribe still views the area in and around the Mashel River and its prairie as important and are involved in its preservation and conservation. This is a part of the Nisqually Tribe’s efforts to bring back vital elements of their culture: the Squalliabsch culture.

New discoveries about Indian Henry. Reasons for coming to the Mashel Prairie and information about others who lived there were actually ...