Survival of a Settlement

Van Eaton was not the only one with ideas of starting a town.  Off Scott Turner Road along the Mashel River lay the settlement of Meta.  In 1887, Walter Baker, a Texan, built a general store, post office (November 11, 1892), and accommodations for his guests.  He named the settlement after his   Guests dined on home cooked meals with fresh meat provided by Indian Henry (He charged Baker a $1.00 a deer).  Folks from the nearby settlement of Alder (now gone) shopped at the Meta store.  After getting supplies and perhaps some mail, settlers loaded up a horse to carry their goods back to their homes.  Once arriving, the horse was unloaded and trained to head back home to Meta.  Baker also rented his horses to overnight guest for trips to Mt. Rainier.  As time went on, Eatonville drew more travelers, and Meta closed down in 1897.
wife and made it their home.
While still in Texas, Baker’s mother gave him a seedling from a butternut tree.  He told his mother that wherever he put down his roots, he would plant that tree.  As of 1964, the tree was still there.  Walter Baker and his family remained in the area.  He rented the buildings to the newly arrived family of Josef and Anna Mensik in 1902.

A seemingly favorite town story is that Baker invited several townsfolk up to his place to celebrate the Presidential election of 1893.  Supposedly, because of Baker’s disdain for Van Eaton and others from the town, the coffee had been spiked with croton oil.  Many fell ill except the intended victim, Van Eaton, who apparently did not drink coffee.
Another would-be town builder was Mr. Holland.  In 1892, he constructed a saloon, hotel, and store at the base of Ohop Hill.  “Hollandale” it was called but did not survive financially and was sold.
When T. C. Van Eaton came back in on March 20, 1889 to what is now Eatonville, he brought along his brother-in-law Nate Williams and a man named Bill Stone.  Van Eaton constructed a horse barn and larger cabin that served as trading post and home.  The Van Eaton Trading Post was a   The Indian people took advantage as well and made up the majority of his first customers. Pack trains of horses or mules were used to bring supplies into Eatonville and folks from the surrounding area carried it back out to their homes.
“godsend” according to early pioneer Paul Haynes. The homesteaders found relief in the proximity of supplies closer to them.

Around 1894, Robert Fiander took his five-year-old daughter Susie to see the settlement of Eatonville.  She remembered the trip being a bit frightful as they almost collided with a bicyclist coming down around Ohop Hill.   Once at the post, her father gave her a nickel to spend.  Being shy, Susie was at a loss for words as to her purchase.  Van Eaton, sizing up her inner turmoil, picked out a big stick of red and white striped candy from a glass jar.  Her pretty, little smile was payment
enough.
Out of the trading post, Van Eaton ran the “post office.”  His first task as Post Master was to receive a registered letter, delivered by stagecoach, on December 13, 1890. Letters were few and far between.  Five years later, with the increase in mail, Van Eaton built a separate cabin on the corner of Mashel Street to house the Post Office.

Van Eaton knew if he wanted to start a town, he needed businesses to draw people from the surrounding areas.  He needed an edge over the other competing settlements.   With plenty of land and few stores and services, he offered parcels of land for free to those who started certain businesses. By 1890, seven people lived in Eatonville.
In 1892, Frank Groe built the Groe Hotel on the south corner of Mashell Avenue and Groe (Center) Street.  Groe was a man of jovial humor within his short, chubby stature.  He later changed the name from Groe to Pioneer Hotel.  The hotel was constructed from split cedar boards without using any sawed lumber and nailed to a frame.  It was 20x40 feet and two stories high.
The hotel served as a place to stay, eat, and socialize.  Eight guest rooms provided cozy rest for overnight guests.  The cook had to get up early not only for the guests but for men driving cattle to Tacoma.  After a long day of working, or just whenever a break was needed, many went over to the hotel bar to gripe and swap stories.  One such teller of tales spinning stories from the Pioneer Hotel was Rant White.   Rant White first appeared in Eatonville sopping wet after crossing the Ohop Creek.  Jane Osborne (later Van Eaton) while at work at the Groe Hotel saw him outside, brought him in, and put him by the fire to dry.  It is said that he never forgot her kindness.
White came to Eatonville about 1891 with his wife and started a homestead on a hill close to   Sadly, his wife died soon after.  He never remarried and spent most of his time at the Groe Hotel.  He was said to be a short, thin man with a nasal, somewhat high-pitched voice, and eyes that seemed to wander from one to another.  To most, he seemed ancient and did not change much in appearance over the course of his life.
town-called “White’s Mountain.”

Rant White worked as a handyman, but his real skill was in spinning tall tales and fiddle playing.  He told vivid stories of man-eating cougars and of a vast, petrified forest with petrified animals and birds somewhere out among the firs.  Frequently, several boys and girls rushed over after school to secure a spot near Rant to hear the next new tale.
His fiddle playing brought sweet sounds to the little town.  At social functions, many were up on their feet dancing to his merry tunes.  Many times, he would wander with a knapsack on his back and stay with friends like the Osbornes, McCulloughs, and John Mensik.  Rant and his friends serenaded folks nearby with impromptu fiddle playing secessions.
White was tough and willing to protect those who became like family to him.  One day some Yakima Indian men came into town and demanded to know where they could find Wickersham Henry.  Wickersham was Indian Henry’s grown son.  Apparently, he had “taken” a wife from Yakima.  These men believed she was taken against her will and wanted to hunt Wickersham down.  If no one was going to tell them where to find Wickersham, then they wanted some hard drink.  Rant White suspecting big trouble, confronted the men, refused to let them get drinks, and sent them out of town.
The Yakima Indian men did catch up with Wickersham and the girl.  They were pretty angry and accused him of abduction but were persuaded to go before a judge instead of talking with their guns.  Ironically, they met before Judge James Wickersham who Indian Henry’s son was named after.  Herbert Hunt wrote this account:
"Indian Henry and family were placed on one side and the Yakima Indians on the other.  The comely maiden was seated between the rival factions.  The judge, after discussing for a moment the sanctity of the marriage tie and the menace of unlawful force, told the girl to choose.  She took her seat beside Wickersham [sic].  The rest was but a matter of ponies and blankets."
When Rant White died in 1931, he was memorialized as a pioneer, trapper, fiddler, teller of tales, and a true citizen of Eatonville.
The tourist and trade were most welcome during the years of 1892 and 1893. For many of these early Eatonville families, times got really rough as the entire United States was facing an economic depression.  Settlers brought furs and traded them for supplies at Van Eaton’s store.  Van Eaton then sold the furs to dealers in New York and St. Louis getting paid in gold. Sometimes men and women would go into Puyallup or Orting to pick hops trading labor for cash (50 cents a day).
Tourism to Mt. Rainier also brought good business to Eatonville.  People came from all over to see the crown like peaks of the mountain.  They traveled by horseback, wagon, foot, and even by bicycles.  At times up to 150 bicycles were seen parked in front of the Eatonville Hotel for an overnight stay or a meal.  Horse drawn stage coaches were used to bring tourists in to see Mt. Rainier.  Some settlers even made money charging for dinners for the hungry travelers. 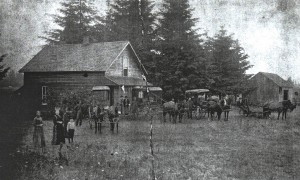 Van Eaton also ran a stagecoach from Spanaway to Mt. Rainier.  The journey took a day and a half and made a rest stop at Eatonville for the night.  Alfred Lovell’s account in 1893:
We arrive at Eatonville at four in the afternoon.  This village consists of a hotel, a store, post office, real estate office, and one house.  All are situated in a small clearing in a dense forest and all the buildings are of homemade lumber.  Boards, clapboards, shingles, etc. being split from cedar logs, by hand.  The only piece of millwork being the outside of the front door of the hotel and possibly some of the sash.  Even the floors and partitions are of split cedar boards, some are 12 or 14 feet high and a foot or eighteen inches wide.  This cedar is remarkable for splitting freely and straight and all buildings from Eatonville to Elbe are either made from fir logs or split cedar lumber and usually a combination of both.